There’s apparently a new TV show on CBS called Scorpion that has received mixed-to-decent reviews. It supposedly is about some computer security geniuses/outcasts who help “solve complex, global problems.” However, Annalee Newitz’s description of the stupidest, most batshit insane hacker scene ever from the first episode, suggests that the show is not worth watching. In the past few years, it had been kind of nice to see Hollywood actually seem to have some clue about accurately portraying hacking in some situations, but that’s all apparently been tossed out the window with Scorpion. Even if you don’t read Newitz’s story (or view the video clip), just know it involves an ethernet cable hanging from a flying plane with a car racing beneath it to download some backup software needed by the airport so planes can land. Yeah.A big part of the show’s marketing is the claim that the story is partially based on the life of one of the show’s executive producers, Walter O’Brien. CBS News has an article talking up these claims of O’Brien’s amazing feats, helping out its parent company, CBS, who broadcasts the show. But… for such a “genius,” many of O’Brien’s claims are coming under scrutiny, and they’re not holding up well. Having just gone through the whole Shiva Ayyadurai / inventor of emailcrap, it’s beginning to sound like a similar case of someone pumping up their own past for publicity purposes.

The claims about O’Brien are both odd and oddly specific. Here’s CBS’s reporting:

Walter O’Brien has the fourth highest IQ in the world.

Elsewhere, he claims that he was “diagnosed as a child prodigy with an IQ of 197.” First off, there are significant questions about IQ as a particularly useful measurement of anything. Furthermore, the idea that there’s some definitive list of those with the highest IQs seems equally questionable. A quick Google search will show you a whole bunch of “top 10 lists” of IQs — all of them different, and none of them including anyone named Walter O’Brien.

O’Brien’s story started unraveling when he made the somewhat unwise decision to do a Reddit AMA. Redditors are pretty good at sniffing out completely bogus claims, and it didn’t take them long here. Also, Asher Langton has been doing a bang up job debunking basically every claim that O’Brien makes.

Among other things, O’Brien’s story claims that he began Scorpion Computer Services in the mid-1980s and that “Scorpion has mitigated risk for 7 years on $1.9 trillion of investments and has invented and applied Artificial Intelligence engines to protect United States war fighters in Afghanistan.” It’s not even entirely clear what that means. It goes on:

Since 1988, Scorpion’s team of world class experts partner with clients on a global basis, across industries, to add real measurable value in mission-critical initiatives from planning, to execution, to running the business. Scorpion’s senior management has a collective knowledge of more than 413 technologies, 210 years in IT, and 1,360 projects. Scorpion himself has created over 177 unique technology inventions including ScenGen and WinLocX and is one of the world’s leading experts in the application of computer science and artificial intelligence to solve complex industry challenges.”

Again with the odd, and oddly specific claims. They have knowledge of 413 technologies? Do they have a list somewhere? Does it include the coffee machine in the lunch room? Did they send someone out to get the new iPhone 6 to make it 414? Either way, there are… just a few problems with these claims. As Langton points out, the “headquarters” of Scorpion Computer Services Inc.does not appear to be a particularly large or impressive company. Its headquarters is actually… a UPS store address That report notes that it has one employee, and revenue of $66k. It’s possible that the report is inaccurate, but for such a big and successful company, you’d expect to see… at least a bit more historical evidence of its existence. But there is none.

And then there’s this page (and here’s the web archive version in case O’Brien figures out how to delete the old page), which apparently used to be the site for Walter’s Scorpion computer Services, that, um, looks like it was built on GeoCities — complete with the animated fire torches next to the dreadfully designed logo. 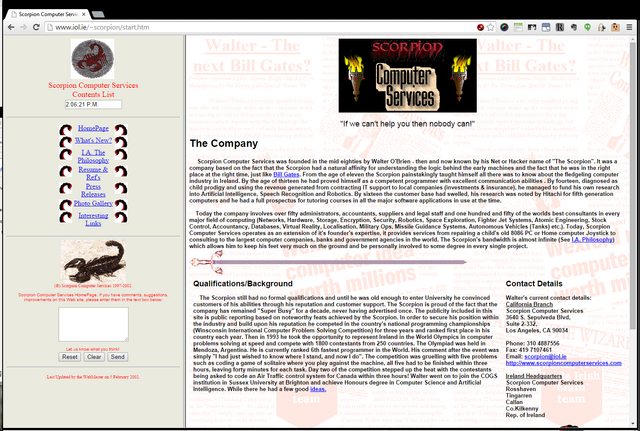 For a big, massively successful company… you’d expect, um, something a bit more professional. Walter’s own Linkedin profile notes that he actually worked at Capital Group for a while, with redditors claiming he was just a QA guy there, though his profile says he was a “technology executive.” Many other claims on the company’s website read like self-promotional gibberish. “We saved $43 billion in opportunity risks over a five-year period.” “We invented an efficiency engine that performs 250 human years of work every 1.5 hrs with over 99% improvement over human error.” By the way, the “see how” link on that last one doesn’t actually show you “how” it just takes you to a page about how the company is a value added reseller “for proven IT products.” The entire website looks like gibberish from someone trying to sound like a real tech company. It reminds me of Jukt Micronics.

Langton also turned up that O’Brien appears to have another “company” called Strike Force, using the same UPS Store address, and with very, very, very, very similar website design and bullshittery. That site has a really bizarre “what others say” page, listing out random referrals for O’Brien, which are generally just the standard empty “personal reference letters” people without much experience tend to ask some former colleagues for when looking for a new job. The first one is from Steven Messino (with the date conveniently stripped off) which looks like the generic job reference letter: 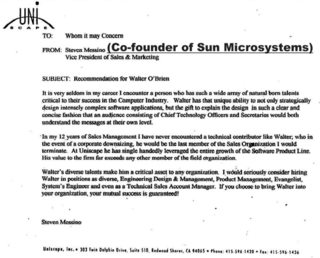 Note that O’Brien claims that Messino is the co-founder of Sun. That’s… not true. Anyone who knows anything about the history of Sun knows it was co-founded by Andy Bechtolsheim, Bill Joy, Scott McNealy and Vinod Khosla in 1982. Messino’s own LinkedIn page shows he joined Sun in 1988. Six years after it was founded. Also, Sun had its IPO in 1986. So it’s not like this was a small company when Messino joined… as a “regional sales manager.”

Basically, everywhere you look, O’Brien’s claims are either massively exaggerated to downright ridiculous.

There are also some odd personal claims about “Homeland Security” coming to find him as a 13-year old boy for hacking into NASA. Except, when he was 13, there was no Homeland Security — an agency established after the September 11, 2001 attacks. O’Brien also claims this:

Scorpion was born and raised in Ireland, and at 16, ranked first in national high speed computer problem solving competitions. At 18, he competed in the World Olympics in Informatics and has ranked as high as the sixth fastest programmer in the world.

Sixth fastest programmer in the world? Really? Some folks on Reddit noted that it doesn’t appear Ireland competed in the “International Olympiad in Informatics” in 1993, though someone else found a report from the University of Sussex, which O’Brien attended, noting that O’Brien hadcome in 6th in a different contest, but in the Olympiad itself, he came in 90th. I mean that’s great for an 18 year old, but it hardly makes him into some programming genius.

And we won’t even touch the claims that his programming helped catch the Boston Marathon bombers, because… well… really?

Frankly, the parallels with Ayyadurai and the email story are there. It certainly appears that, like Ayyadurai, O’Brien was a bright kid who did some impressive programming as a teenager, but then didn’t appear to amount to all that much noteworthy beyond that. Try searching for any news references or evidence of O’Brien doing anything other than in the last few months in the publicity leading up to this new TV show. However, he is trying to reinvent himself and rewrite his history as some sort of genius programmer responsible for all sorts of amazing things, very little of which seems directly supportable. Of course, CBS doesn’t really care, so long as they have a fun TV show that people watch, but at the very least, they shouldn’t continue to spread the exaggerated myths about O’Brien that appear to have little basis in fact.